Children who are between the ages of one year and three years are referred to as a group as “toddlers,” but there is a great deal of difference between a one-year-old and a three-year-old. Here we’ll just discuss onesies and twosies. 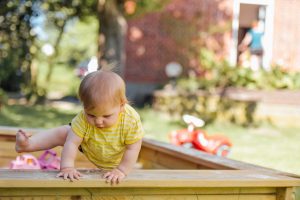 The main job of a one-year-old as he progresses to being a two-year-old is to establish self-awareness, develop speech, become responsive to others, and begin to get the basics of self-control.

When a child is between the ages of one and two, parents can begin to take note of indications of developmental problems. Excessive adaptability problems become apparent; withdrawal, passivity, fearfulness; obsessive head banging, finger sucking, rocking; lack of interest; and being overly rebellious. If any of these extreme behaviors are noted by parents, they should be discussed with the pediatrician.

Physical development between one and two years includes: * Learning to walk * Learning to climb * Pushing and pulling objects * Stacking one object on top of another * Removing clothing

Intellectual development between one and two years includes: * Begins to explore the world around him * Used all five senses to learn about his world * Begins to learn and say names of simple objects * Can form simple one- or two-word sentences * Begins to enjoy and maybe imitate simple melodies and rhythms

Social development between one and two years includes: * Becoming possessive of his own possessions * Enjoying interaction with familiar people * Waves bye-bye and begins to accept separation

Emotional development between one and two years includes: * Begins to develop trust * Throws temper tantrums * Is usually happy but can become angry * May become frustrated

Morals begin to develop at about age two and are indicated by the child becoming sensitive to and seeking the approval of the adults in his world.