There is no specific timetable for development and development is not a “one-size-fits-all” situation. Children develop in different areas at different rates. Development is divided into five general categories: physical, 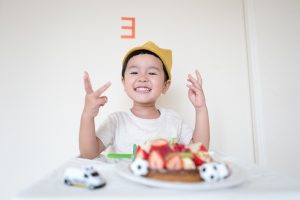 intellectual, social, emotional, and moral. It is perfectly normal for children to make greater advancements in one area at a time.

* His imagination develops and he likes to assume “play-like” grown-up roles as mommy, daddy, fireman or superhero.
* He is curious and asks a lot of questions.
* He begins to understand the cause/effect concept.

* He can now accept separation from his mother calmly.
* He beings to interact with other children his own age.
* He begins to notice and imitate the differences in the way men and women behave.

* He begins to understand the difference between right and wrong.
* He wants people to like him.
* He is gaining self-control.