There’s a very good reason why we often refer to two-year-olds as the “terrible twos.” They are discovering themselves. They discover that it is possible for them to make their own choices about food, clothes, sleep, and play. The two-year-old is aware of becoming a separate and distinct human being. 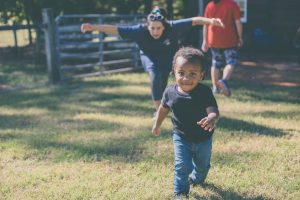 Indications to parents that there could be a problem in normal development are if the child becomes either too easily adaptable or too aggressive. Both extremes indicate problems and should be discussed with the child’s pediatrician.

There are five general areas of development: physical, intellectual, social, emotional, and moral. There is, of course, no specified or RIGHT order in which children develop. Remember that each child is an individual, and the following is only a general outline of the development expected of two- and three-year-olds.

* Coordination improves and physical activities include: running, climbing, kicking and throwing a ball, pulling and pushing objects, etc.
* He handles and manipulates small objects like buttons, zippers, pencils, etc.
* He feeds himself with a spoon.
* He helps to dress himself.
* He can build a block tower of six or seven blocks.
* Will gain control of bowels and bladder.

* He is very curious and explores the world using all five senses.
* He can make sentences of three or four words.
* He can sing simple songs.
* He can keep simple rhythms.

* He is still wary of strangers and clings to his mother.
* Attempts to imitate adult activities like washing dishes, mopping floors, applying makeup, shaving, etc.
* He can participate in simple group activities like listening to a short story.

* Begins to assert himself and says “no” frequently.
* Shows emotions by laughing, squealing, throwing temper tantrums and crying hysterically.
* Develops fear of such things as animals and loud noises.