Problem solving and conflict resolution for children should begin being taught early on. If you’re a parent of multiple children in your family this becomes apparent as it won’t take siblings long at all to become engaged in some type of ‘sharing’ violation with one another. Children of a family with other children almost immediately are 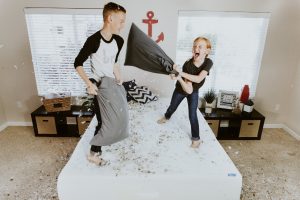 engaged in a social type of activity albeit only with their brothers and sisters early on. Conflicts and resolving those conflicts soon become part of their day.

At an early age children are in more of a self exploration and self discovery mode. From there and from a socialization progression you will see kids playing together but not as a coordinated group. In other words, the next progression is to see a group of children ‘geographically’ playing together but they all still have their own toys and objects. The next step of the socialization of play is around 2 to 3 years old where you’ll see kids begin activities that begin to require interaction and subsequently problem solving and conflict resolution.

As parents and caregivers, you have the opportunity to actually teach conflict resolution and problem solving techniques and skills rather than just solving them. As a part of conflict resolution it’s important to get children to express themselves and their feelings and get past their initial emotional reaction. This will initially take some time and practice, and you should take the time to get back to, and discuss the conflict that occurred at a later time or date after the emotions have calmed sufficiently down. Discussing previous conflicts and how they could have reacted and handled them is a key in their emotional growth.

As all children do early on, before they have the ability to concisely express themselves, they learn that many times crying and even screaming resolves their conflict because as parents we try to assuage the behavior by getting them what they want or need. Understanding and teaching conflict resolution to your children is an integral part of their social development and growth. Without these tools, children will grow into adults resolving problems the only way the have ever known how to do – with emotional behavior, and sadly, many times with force.

There is a tremendous amount of excellent information on these techniques and teaching them to children of all ages. Make them part of your day, and a part of your child’s life and they will grow in depth and confidence.

TLC For Kids, Inc. has been St. Louis’ premier nanny and babysitting agency for over 30 years. TLC For Kids’ dedicated staff is ready to assist you in finding nannies, tutors, newborn care specialists, sitters and more.  We serve St. Louis, Atlanta and Florida. Reach us at tlc@tlcforkids.com or 314-725-5660